So, we all want to grow… change… and become the best versions of ourselves.

But sometimes, don’t you think we can be influenced by people wanting to change us for their own reasons?

We’ve all been there — maybe at a time when we were vulnerable or low on confidence — when we were extra susceptible to the influence of another person. It is only years later that we realize we were changing to please them, and not necessarily because we had a problem we wanted to fix.

Growth is good, but changing to please another person can have you moving away from who you want to be.

In my opinion, there are some things you just gotta stay true to. These are the areas I believe we should set major boundaries on other people’s influence over…

No matter what someone’s opinion is, we are the ones who have to live with the decisions we make. If you feel strongly about stealing, even to the point where stealing the neighbor’s WI-FI isn’t OK with you, that’s something you may not want to change because your flatmate thinks you need to loosen up.

The same goes for anything you feel strongly about. Why? Because at the end of the day it is you who have to live with yourself and the decisions you make. People come and go, you are with yourself forever!

Let’s flip back to the ’90s for a second, and remember some of the greatest, truest lyrics of all time.
Ahem…

You can buy your hair if it won’t grow
You can fix your nose if he says so
You can buy all the makeup that M.A.C. can make
But if you can’t look inside you
Find out who am I too
Be in the position to make me feel so
Damn unpretty.

TLC was on the money because so often we pick at and change ourselves based on what someone else considers hot and beautiful.

The things I remember about those I have loved are never what most people obsess over. What I remember are things like a birthmark on someone’s back or a teeth gap; those bits that are special and sets them apart.

If you want bigger boobs to be the cherry on top of the cake, go for it! But if you’re doing it to improve your self-confidence, chances are you will feel the same way about yourself when the bandages come off.

Besides, if someone’s going to feel that way about your A cups or wonky nose, he’s not the one you want to be grey and wrinkly with anyway.

Ladies, it’s a MAJOR red flag if anyone wants to separate or come between you and those who love you unconditionally.

When you embrace a person, you embrace the important people in their lives too.  Likewise, if you don’t like your new man’s friends, you will need to decide if you’re going to embrace them, silently tolerate them, or keep it moving.

4. Your decision to not have children

Just because most women want kids doesn’t mean something is wrong with you if you don’t want any of your own.  It is easy to be pressured by loved ones (or our Facebook timelines) to think otherwise.

It’s a valid choice for some women and since only you know what type of responsibilities you can handle and what kind of life you want to create, you get to have the final say on this one!

5. Your faith or lack thereof

There was a time when most people identified with one of the major religions. Today, more and more people identify as spiritual, agnostic and atheist.

I’m not religious, but I believe all people should be respected for their beliefs.

A strong faith in these modern times takes a lot of commitment and staying true to a religion or spiritual practice shows strength.

Likewise, if you believe God is Nature or something else that is unconventional.  IMO, this is one of those choices only you get to make.

6. Your sense of worth

No one ever says they’re doing this, but you feel it…someone gradually chipping away at your sense of worth.

Don’t ignore the feeling that, in the presence of some people, your spirit falls apart.

If you are a sensitive person, you may be playing up to other people’s label of you without realizing it — “the office blonde,” or “the fat friend.”

Is Distracted Parenting Affecting Your Children? Here’s What You Can Do About It.

Sometimes, it isn’t just a guy’s opinion that we pay attention to; it can be anyone we are eager to please so you end up playing “the fat friend” role without realizing it’s tearing down your sense of worth. Because if people say these things enough, even in jest, they can seep into our opinions of ourselves.

7. Your sense of style

Like so many things, style is an evolving thing. When I was in high school, I considered myself a punk. Now, I’m more French-boho chic.

How do I know my style is me? It matches my vibe and feels like a naturally evolved expression of my own journey. If I wear a dress, I feel awkward and they don’t suit my figure or my lifestyle.

It is important to look good, but you positively glow when you FEEL good about yourself.

So while it’s fine to look to celebrities, magazines, and friends for inspiration and from time to time, advice; it’s not fine for anyone to tell you how to dress.  If your new man is doing that, pay attention because he may be a control freak.

BTW, if you’re watching Orange is the New Black at the moment, you’re getting to know the beautiful Ruby Rose who plays Stella Carlin.  She first came to my attention when I was traveling in Australia years ago. In interviews, she has said that short hair and tattoos are what feels comfortable to her. So, despite casting directors wanting her to remain the conventional shiny Aussie blonde model-type early in her career, she knew that wasn’t her.  Thank God she never changed for anyone, hey?

No matter how much you need love, friendship, family or any type of security, there is something wrong when a person is only too willing to teach, teach, teach…

Connection, loyalty, trust, and true love shouldn’t be based on you transforming into an image that someone else wants you to be. The world needs originals and as Ralph Waldo Emerson said…

“To be yourself in a world that is constantly trying to make you something else is the greatest accomplishment.”

Have any parts you wouldn’t change for anyone? Tell us and inspire our followers here and on Twitter @vurbmagazine.

Tags
accept yourself change love yourself 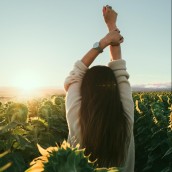 Jackie is a northern English girl living in 'The Big Smoke', London. She enjoys her work as a Digital Marketer and is passionate about multimedia including content creation and graphic design. She's almost as passionate about peanut butter as she is about fitness (which she needs to shift the peanut butter!)

How to rock the “All-White” look

Thandie Newton’s Ted Talk On Embracing Otherness Is Everything!

Shay Mitchell: Why I used to hide my Filipina heritage

The love project that improved these couples’ lives immediately

Amber Starks: There is diversity in beauty