Many say that successful people are “just like the average person.” Well that may not be entirely true. After researching hundreds of successful people, it was found that they share a few commonalities that is starkly different to the way most people behave.

Whether or not these attributes are the ones that guarantee success, no one knows. I would guess that these 7 however, just might be worth looking into though if you’re about success.

Here’s what they have in common:

1. They wake up insanely early

This one is pretty much consistent across the board. Many successful people wake up at ungodly (or Godly, depending on how you see it) hours. Typically from 3:30am-6am. Their morning usually starts off with emails, yes, but also includes an early meditation or workout routine.

Most people have trouble saying “no” to others. Maybe it’s the fear of not being liked. Maybe it’s wanting to please everyone. Successful people don’t worry themselves with such matters. They have a goal they want to see come to fruition and no one’s feelings are going to stop them from making it a reality. They’re comfortable with saying no…and they say it a lot.

The number and variety of people who meditate might surprise you. From CEO’s to celebrities and from rock stars to athletes, a large number of successful people practice some form of meditation; mainly TM or mindfulness. But it goes beyond that. A number of Fortune 500 companies, including Google, AOL, Aetna and Apple now offer meditation and mindfulness classes to their employees.  And they didn’t just to be warm and fuzzy.  They did because a decision-maker at that company experienced the productivity and wellness benefits for themselves first.

There are so many successful people who have been reported to have some form of OCD – from mild symptoms to extreme forms. Some of the names you might know that have a heightened obsession with cleanliness and order include Michael Jackson, Albert Einstein, Nikola Tesla, Justin Timberlake, Katy Perry, Donald Trump, David Beckham, Martin Scorsese, Charles Dickens, Jessica Alba, Howard Hughes and Cameron Diaz, to name a few.

5 Types of clothing I no longer buy

5. They repeat themselves, a lot

When a successful person is passionate about something – you’ll never hear the end of it – until it manifests, that is. They will continue saying the same thing, almost like an affirmation, day-after-day, maybe even year-after-year. To the people around them, it may seem incredibly annoying, but the end result…success.

You might think that successful people have a do-it-all attitude, but the opposite is true. Successful people know the power of having a team, and they know that everyone brings special gifts to the table. They know what their strengths are and don’t use their shortcomings as an excuse not to move ahead. They just find someone who excels in the area they’re not strong in, and get their help.

7. They start at the end

Successful people start with an inspired thought about the future. A vision. They see their dream in bright colors and flashing lights. They are the visionaries. Once they see their goal and feel the excitement, only then do they work out the kinks and enlist the help of others to make their dream a reality. 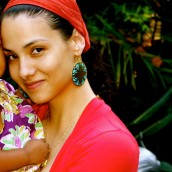 Bess is a wellness coach and educator, healing arts practitioner, and was lead Ayurvedic therapist for the Chopra Center for Well-being for 10 years. She is a dedicated wife and mother to four children. She is passionate about natural forms of healing, veganism, fitness and healthy living. She gets her "juice" from juicing, yoga, meditation, and being a mama.

How to get Rihanna’s unapologetic style

Have an Idle Weekend

3 weight management habits you should master

This old school theory can help you understand YOUR motivation

5 ways to fund your entrepreneurial dreams