You know those women we used to look up to when we were preteen girls? Fabulous, with fancy careers, leading even fancier lives in a big city? Yes, yes, like the characters on “Sex and the City” and “Girlfriends.”

Well, I always knew I wanted to be one of those women.

Fast forward ten plus years, as a girl – scratch that – as a woman in her twenties, I find myself looking down at my Michael Kors satchel and wondering,

“When will I become one of those polished women who has her act together…not just the bag?!”

After doing some research – talking to women who are established in their careers, following thoughtful people on social media, reading leadership books and having some deep conversations on the subject – I realize something really important:

This is great news so maybe now I can stop freaking out.  We’ll see.

I did learn that finding yourself isn’t as perfectly mapped out as we thought, but the process doesn’t have to be overwhelming either.

There are some things we can actually do to help us figure out what we like and who we are.  I’m going to share three I think are applicable to anyone.

People who have good relationships and get along with others tend to be more successful, so let’s start there.

Hold onto anyone you consider “good people” and associate yourself with others who are doing things you want to do. I live in Bermuda and went to college in New York City. Now through RevolutionWE, the organization I co-founded, I’ve been able to stay in touch and continue to network with friends from NYC and all over the world.

Building and nurturing your professional contacts is always important; more so when you’re building a name for yourself or starting a career. Luckily, with social media, we’re able to do that so easily.

We hear this piece of advice all the time, but how important is it? Very!

As we start taking on more and more adult responsibilities, we have to balance all that reality with something that we can get excited about. Your passion may be in the arts (like photography), a sport, working with animals or doing something enterprising. It’s important we don’t abandon things like those that fire us up.

Something I learned firsthand: your passion can lead to major opportunities and these things we get involved with have the ability to branch into other things.

Love what I’m describing but have no idea what on earth your passion is? Don’t worry – this brings me to my next point.

a) Know who you are and be THAT!

Think about women like Venus and Serena Williams who changed the game of tennis by being themselves while letting their talent speak for them.

5 Types of clothing I no longer buy

What about Mrs. Eleanor Roosevelt? This first lady brought her activism and humanitarianism with her to the White House when it was just not done.  She was outspoken and at the time, considered a controversial First Lady for it. She was the first presidential spouse to hold press conferences, write a syndicated newspaper column, and speak at a national convention.

Maybe you’re not as fearless as you want to be now, but with practice, you will fear LESS.

TRY THIS: If you see someone doing something you want to do or think you’ll love, ask, How can I get involved?  How can I help? By putting yourself out there to be rejected (yes, rejected), you’re practicing fearlessness. Because guess what – half the time you’ll get a Yes, especially if you’re sincere. People can’t resist sincerity. Maybe you have to be the person who starts that something. Hmm…there’s a thought!

There is no task more fearless, I hear than figuring out who you are.  We should be spending our twenties having as many different experiences as we can to find what clicks and makes us tick.

So while work is important, so is fun and play. Some people wait for “the right moment” to do things they really want to. Our twenties IS that moment! Want to travel to exotic places? Go! Want to get back into ballet classes like when you were a little girl? Do it!

Have the courage to be YOUnique, to believe in yourself and hold out for what you want.  Risky, yes…but it is the path to becoming one of those polished women who has her act together. And a designer bag or two wouldn’t hurt either. 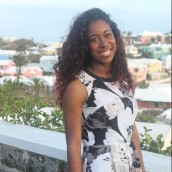 Lexy is a former track & field athlete turned corporate professional. After living in New York City, Lexy now spends her days in Bermuda writing for ResolutionWE, an organization she co-founded to encourage women to pursue their passions while networking with their fellow sisters.