Whether you’re flying solo or part of a couple on February 14th, this year’s is one you may want to plan for because it lands on a Saturday. We’re taking a cue from these cute couples and happily single ladies around the globe and keep it simple and non-commercial.

The (almost) newlyweds in New Zealand

While Valentine’s Day as we know it originated in the United States, you’ll find heart-shaped boxes of candy and folks desperate to avoid the commercialism even across the International Date Line. New Zealander Pippa Vague said, “It’s most popular among the younger generations and uncommon for anyone above 50 in New Zealand to really acknowledge it.”

Pippa’s own paramour has been part of her life since high school and the couple is recently engaged. “Our first Valentine’s Day was probably the best,” she said. “We were 17 and had only been dating a few months, so Guy felt a bit of pressure to impress me. He turned up at my house after school with chocolates and huge flowers. It was such a surprise; I still remember it so fondly.”

“Whether it’s getting fish and chips at the beach, going to the cinema, or sharing a nice bottle of wine with dinner, we try to just spend some time focused on each other,” she said. “This year will be our first Valentine’s Day since getting engaged, so I’m planning something romantic for him – and hopefully he’s doing the same for me!”

The gamer geeks in Harlem NYC

Harlem resident Jen Britton and her boyfriend are eschewing the traditional restaurant meal for something a little more off-the-petal-strewn-path. “My boyfriend does game design for indie video games,” she said, “so for Valentine’s Day, I got us passes to attend IndieCadeEast, a convention for video game developers and enthusiasts. As a couple of geeks, we love to go to conventions together.”

Britton met her beau in a rock choir, where they clicked as two recent transplants in the city that never sleeps. After over a year as inseparable best friends, they took the next step to enter a relationship and now live together.

While she thinks most New Yorkers take their February 14th plans seriously, Britton’s far from a diehard when it comes to the romantic staples of Valentines. “One of my best V-Days was spent with friends when I was studying abroad,” she said. “We were all either single or far away from our significant others, so we bought champagne and chocolates and had an awesome party and watched movies.”

“It was the epitome of V-Day for me,” she said. “Indulgence and fun times with people who make you happy.”

“If you’re a shy schoolgirl like I was, Valentine’s Day is the best time to tell the boy you like about your true feelings,” she said. “You don’t even have to say anything; you can just give him a box of chocolate and he’ll know what it means.”

Today, Kim spends a chocolate-filled day with friends if she’s not in a relationship. “This year I’m going to go grocery shopping with my girlfriends, and then have a movie night,” she said. “We wanted to go watch Fifty Shades of Grey, but it’s not going to be in Korean theaters until the 26th.”

The Brazilian in Charlottesville

Elisa Ferrante’s February 14th will differ greatly from what she experienced as a child. Originally from Brazil, the 34-year-old scientist now lives in Charlottesville, Virginia where she and her American boyfriend plan a simple dinner at home for Valentine’s Day.

In Brazil, Dia de São Valentim or Dia dos Namorados is celebrated on June 12 and bears no connection to the American Valentine’s Day. Rather, the holiday honors Saint Anthony of Padua who blessed young couples with happy marriages in the 13th century.

Such different customs have left Elisa less than impressed with Western traditions. “I honestly dislike the commercialism and propaganda there is around Valentine’s Day,” she said. “I don’t mind doing something special at home, but the idea of going out and buying a heart-shaped box of chocolates just because that is the accepted norm drives me a bit crazy.”

Elisa went on to explain, “I like that we get to have a day for celebrating each other, but I think that it should be something we do even outside of Valentine’s Day,” she said. “It’s easy to fall into a routine and doing a little something together can make both of us feel special.”

The long-distance Lindy Hoppers in Tel Aviv and London

“We couldn’t stop talking after we each returned home and decided to plan to visit each other,” Shapira said.

Two words to use when you argue

While she waits for the opportunity to head to the UK for a Valentine visit, Shapira will be teaching and dancing the night away. “My favorite Valentines-related memory is performing Beyonce’s ‘Single Ladies’ dance routine with two male friends at a ball as comedic relief,” she said. “Things like dinner or a show are usually overpriced on this day and everything feels too sugary and kitschy for my taste.”

Wherever Shapira finds herself on February 14, it’s not her last chance to celebrate romance. “There is another love holiday in Israel,” she said. “Tu B’Av is the Jewish version of Valentine’s Day and takes place in the summer…Tel Avivians will take any excuse to party.”

The American in Paris

For the French, every day is Valentine’s Day

After twenty-some years in the U.S., Dawn Rainbolt hopped on a plane to Europe and never looked back. Having taught English in multiple countries and wandered the streets of everywhere from the UK to the Baltics, she is now in graduate school in Lyon, France, and has her first real Valentine thanks to a fateful bank trip.

“I was in a bad mood from waking up early and waiting in a three-hour line. I hadn’t showered and I was wearing my “I-don’t-care” clothes, she said. “He came up to me to ask if I needed help and when he heard my accent, he said ‘I can speak American if you like.’” After months of dealing with the European separation between English, spoken by Brits and Aussies, and American, she snapped at him, “There is no such thing as American – I speak English!”

Despite the slightly rocky start, they wound up exchanging numbers that day and now share a home where they’ll enjoy a quiet dinner and bottle of wine on February 14.

Even though she’s excited to be part of a couple, after years of frustration with the American V-Day obsession, finding the streets of Lyon free of heart-shaped decorations and shops overflowing with chocolates and greeting cards has been a welcome respite.

“In France, they don’t need a special day to celebrate love – love is something we celebrate all the time, whenever we feel like it!” she said. 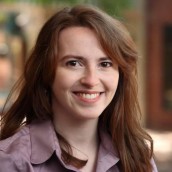 Danielle Bricker is the girl you see smelling the pages of Pride & Prejudice in the corner of a used bookstore. She is an avid reader, occasional hiker, and an obsessively neat eater. Between her day job in nonprofit management and various freelance gigs, she is planning a year-long tour around the world and aims to visit 30 countries before she turns 30.

5 ways to fund your entrepreneurial dreams